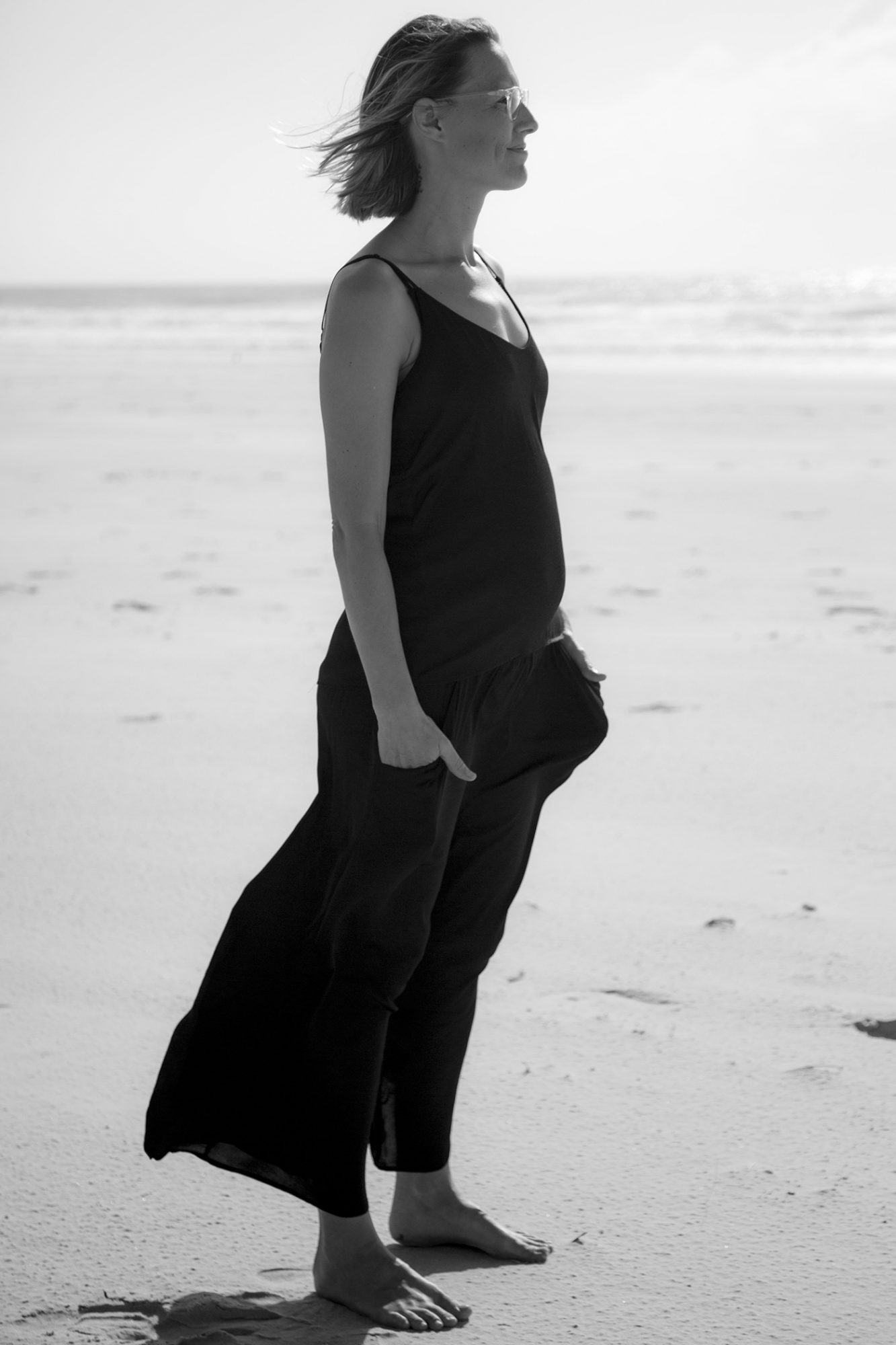 What led you to start exploring the systemic issues in garment production, and what have you learned since you first began this journey?

As I started with zero capital in 2012, the first product I launched was customisable surf leggings. I was paid upfront, produced to order in Bali and then I delivered a month later. Bali was the starting point due to its accessibility and ease—and hey, everyone else was producing in Bali so it seemed the thing to do if you were an indie designer. As the Salt Gypsy blog evolved into a standalone brand and the surf leggings gained traction in the marketplace—I shipped directly to customers worldwide right from the brand’s inception—I began to field wholesale enquiries, and my original maker in Bali was unable to keep up with the larger orders I began placing.

Over the three years that I produced in Bali, I worked with five different garment factories of varying sizes. I would be in these factories and offices almost daily and was able to meet many of the workers that made our garments. From what I could see, I was comfortable with the conditions in which they worked, but I had no idea if they were being paid a fair living wage or if the manufacturers I worked with were certified by any ethical or fair trade organisations. It’s not likely, as it was challenging to find any information on their certification.

I’m grateful for all the of lessons I learned about fashion production when working in Bali, whether it was around design and sampling, production lead times, costings, sourcing, or importing and exporting. But Bali was also confronting on a daily basis, as it is terribly polluted and single use plastic polybags are a massive problem.

I grew up in New Zealand with the ‘Be a Tidy Kiwi’, ‘Reduce, reuse, recycle’ and the ‘Buy NZ Made’ campaigns of the 1980s and 90s. So reducing waste and upcycling existing materials has been in my cultural DNA—both personally and professionally—since forever. What have I learned over the last five years? To always think outside the box, how to problem solve fast, and to always challenge the status quo.

Tell us about Salt Gypsy. In what ways are you currently addressing the brand’s social and environmental impact, and in what ways would you like to improve going forward?

Over the past two years, I’ve switched to a longer-lasting recycled nylon lycra, biodegradable packaging, and Australian manufacturing. I’ve also become R-Certified and initiated a social investment program in which customers can choose to donate to a professional surf athlete or beach conservation group.

Salt Gypsy is completely self-funded so I’m often restricted by a lack of capital, and that means there is plenty of room to improve! As we are predominantly an online business, I would love to figure out a better, cleaner process for our online and wholesale distribution. I also dream of the day I can support even more talented oceanwomen in their professional pursuits.

In 2015, you ‘put a brake on production in order to re-establish your supply chain and ensure Salt Gypsy was producing the best quality product.’ What influenced this decision and in what ways did you change the way you were operating?

In mid-2015 I was supplying thousands of leggings to Urban Outfitters, and around this time two things happened in the space of a week that radically challenged my thinking, and initiated the pivot that has led to the past two years of restructuring my supply chain. Firstly, I co-organised and attended the world’s first Surf + Social Good Summit in Bali. Secondly, the large factory I worked with and trusted made a production muck-up that cost me thousands of dollars. As a small business, that was thousands of dollars I could not afford. Those events forced me to look at Salt Gypsy as a profitable business, and a platform from which to do good. To create products I could be proud of, and support my community of oceanwomen.

“I grew up in New Zealand with the ‘Be a Tidy Kiwi’, ‘Reduce, reuse, recycle’ and the ‘Buy NZ Made’ campaigns of the 1980s and 90s. So reducing waste and upcycling existing materials has been in my cultural DNA—both personally and professionally—since forever. “

Salt Gypsy uses ECONYL®, a 100% regenerated Nylon yarn made from pre-and post-consumer Nylon waste. Tell us more about this product and why you have chosen to use a more sustainable fabric option.

To me it’s a no-brainer. Why use cheaper, low quality textiles with a short lifespan when there are now sustainable alternatives in the marketplace? I believe the ECONYL® fabric we use, and other recycled nylons like it, should be the swim and surf industry standard. Interestingly, it’s the smaller brands switching to this new fabric before larger companies—the ones who have much greater budgets for product development and marketing than we do—and driving change from the bottom up.

Specific information on ECONYL® can be found via our website here.

What does it mean to be R-Certified?

In February this year, we officially became the world’s first women’s surf and activewear company to be R-Certified. With the help of our Australian manufacturer and the team at Encouraging Renewable Energy (ERE), we worked out the energy cost to produce one Salt Gypsy item: $0.12c. So for every production run, we offset its cost by donating that amount per piece to a renewable energy project or organisation in our local region of Northern NSW. The ERE guys have guided us with our donations, and until we can source a renewable energy-powered stretchwear factory somewhere on the planet, we will continue offsetting our energy consumption in this way.

The surf community has a great deal of love for the natural environment—particularly oceans—however, this good hearted community may actually be harming the environment via its garment choices. Do you believe this is due to a lack of awareness? If so, how does Salt Gypsy seek to educate fellow surfers?

Just recently I was part of a conversation on Facebook with some female surfers in New Zealand, who questioned me about microfibres being shed from nylon lycra gear while surfing. I didn’t have an answer—although this article helped shed some light on the problem—except to ask: in order to completely protect the marine environment we so love, do we avoid going in the ocean entirely? And because that is not a likely scenario, how then do we reduce our impact? How can we work within our communities and industry to make changes to the way we produce and consume our surfwear?

For me, it’s using our business to highlight the questions that we need to be asking. To have frank conversations online and in-person with our community and customers. To be non-negotiable about using regenerated nylon lycra that is more durable and has been tested to last four times longer than its generic and cheaper counterparts. By using biodegradable and compostable bags made from cassava root starch, and by using considered design to transcend fast fashion trends. And one day I’d love to implement a take-back program, where we receive used lycra pieces to be reused in a fully closed-loop system.

“Why use cheaper, low quality textiles with a short lifespan when there are now sustainable alternatives in the marketplace? I believe the ECONYL® fabric we use, and other recycled nylons like it, should be the swim and surf industry standard. “

“I simply do not see any other way to operate as a business and as a consumer than to be environmentally and socially responsible, and this is the status quo we are aiming and advocating for.” Accountability is still a huge issue in the garment industry; how do you think we can best influence brands to take responsibility for their impact?

As consumers, we can choose to spend our hard-earned money on independent brands and designers producing responsibly. We can buy less and buy better. As a brand, we can be open about what we learn and share information with our community and industry to help inspire and drive change. And my personal favourite: working and collaborating with other like-minded brands and individuals.

Which initiatives / organisations / individuals in both the surfwear community + broader garment industry do you feel are making significant waves (pun unintended), and why? Are there any brands embracing innovative technologies and processes that you are inspired by?

In surfing, Patagonia is a great example of how a responsible business can be profitable and advocate for the environment at the same time. The development of their Yulex rubber wetsuits, and subsequent sharing of this new material with others, now means that more wetsuits can be produced by different brands. I also greatly admire Madewell, Everlane, and Outerknown in the USA, and Adidas x Parley and their sustainable footwear design.

Has there been any progress over the past few years (throughout the industry or society as a whole) that has been heartening to you on both a business and personal level?

Absolutely. You only have to look at the proliferation of independent designers and small labels across all facets of fashion and subcultures to see that change towards responsible business practices is happening now. I can see how it has developed from the Maker Movement and the boom of Etsy in combination with the LOHAS consumer profile. What was once niche thinking is fast becoming the way to operate and build a sustainable business.

When looking to the future of the surfwear industry, what do you hope to see and how best do you think we can reach that point?

Surf companies owned and operated by women, producing gear for oceanwomen, designed and marketed by oceanwomen. And high level funding and mentorship to support these surf fashion startups.