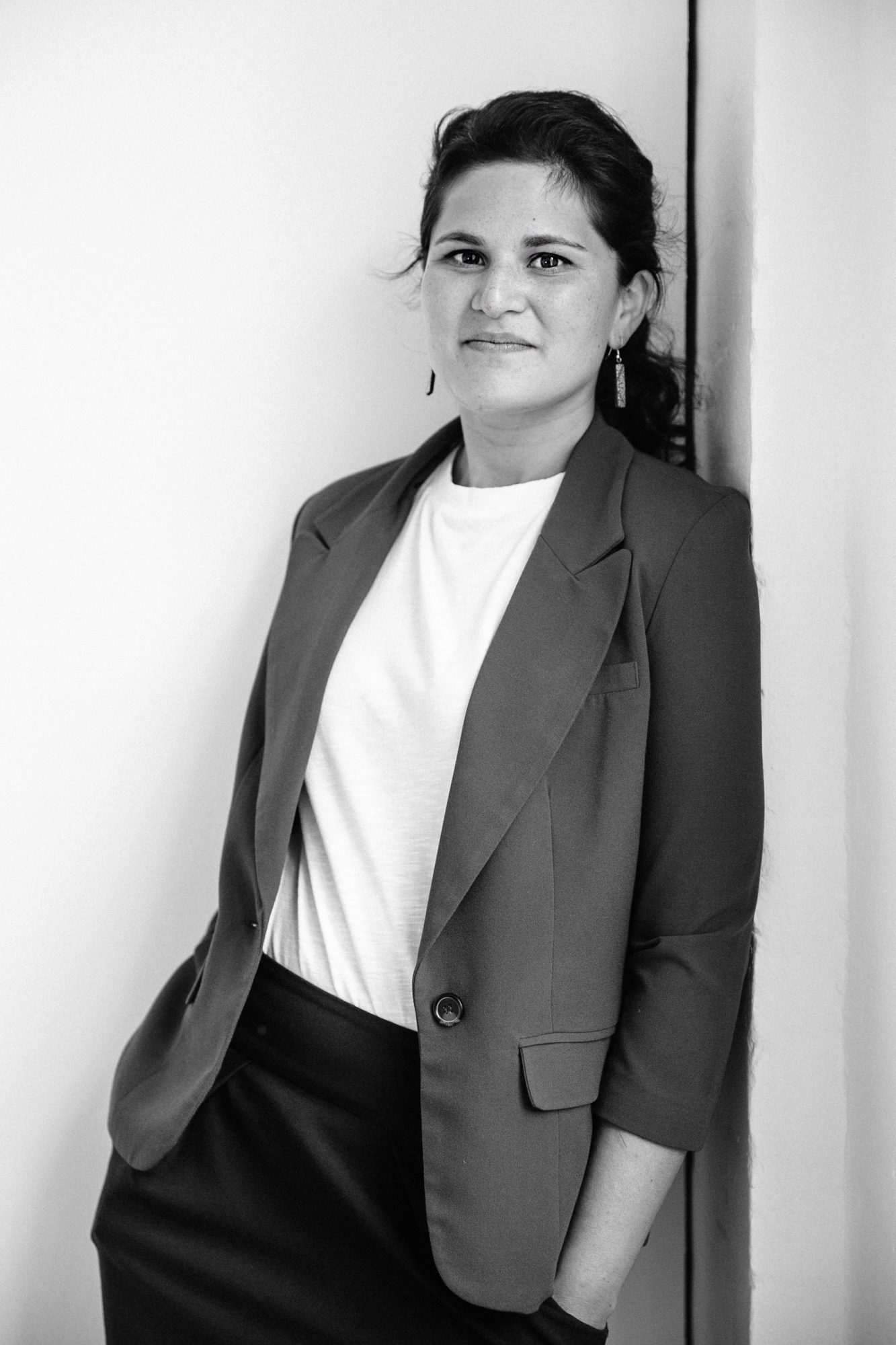 Poonam is former political advisor in the European Parliament and current accreditation advisor at Ethical Clothing Australia. She is also a proud hobby carpenter.

Talk us through your career; what led you to working in the garment industry and how have your personal values influenced your focus on ethics and sustainability?

My background is in politics. I studied two degrees in politics, followed by five years in the European Parliament working as a political advisor. I was fortunate to work for a Member of Parliament who was incredibly motivated, intelligent and honest—bet you don’t read that everyday! Our work focused on human rights, development and the environment in South Asia, so naturally the garment sector was an area of interest. I had the opportunity to go to Bangladesh on a study visit in 2014 where I visited the site of Rana Plaza. You could still see textile remains buried among the rubble.

That was a profound moment: why was I able to go to work without inherently risking my life when so many others couldn’t? And I’m not only talking about the garment industry here. I wanted to know more and do more, so I channelled my efforts towards introducing policy and legislation around ethical garment supply chain practices.

In Brussels, I was surrounded by progressive ideas which were pivotal in shaping my personal values as they are today. For example, there is a distinct absence of advertising in Belgium – you rarely see posters on public transport or huge billboards. Furthermore, shops are closed on Sunday and as a result you see more people out enjoying the parks, cafés and theatres rather than being crammed in a mall. It’s a real shock to come back to Australia where so much of our resources are geared towards promoting consumption.

Last year I decided it was time to come home and reconnect with family and friends—and spend time with my beautiful old dog Boris. Career-wise, I also wanted to move away from policy and work more with the workers and industry to better understand and develop an ethical fashion industry. Fortunately I was given that opportunity with Ethical Clothing Australia, which is where you will find me today!

During your time in Brussels, your work focused on policy and collaboration. Which developments in this area do you find most interesting?

I must say that the years I was based in Brussels—2011 until 2016—were a particularly tumultuous time for Europe, so trying to get the focus on topics outside of ‘migration’ or ‘Brexit’ was no easy task.

Then, in quick succession, the Tasreen, Ali Enterprises and Rana Plaza disasters all happened with major European apparel brands implicated. These events sparked a sort of call to arms for civil society, government and the industry itself, with initiatives and alliances formed to improve this secret dark side to fashion.

A number of voluntary and mandatory national initiatives were in the making around supply chain due diligence, and we felt that legislation would be better achieved at a pan-European level. Not only would this provide greater coverage, but it would help reduce the burden on companies who would be reporting to one authority, rather than each national authority. And that’s not including all the industry and civil society initiatives that are in the making. At present, efforts are continuing to introduce EU legislation.

“It has been a real shock to come back to Australia where so much of our resources are geared towards promoting consumption.”

Accountability is still a huge issue; how do you think we can best influence brands to take responsibility for their supply chains?

As a resolute optimist, I don’t believe any brand willingly seeks to exploit those in their supply chain– garment supply chains today are highly volatile, complex, and geographically diverse. They can be a constantly changing beast, and hard to keep track of 24/7. However, that doesn’t absolve responsibility; improving accountability in this sector is long overdue.

I believe the best way to influence brands to take responsibility is to ensure that firstly they are on a level playing field in this regard, and that there are more solid mechanisms put in place further down the supply chain to deter exploitative practices. Transparency is essential, and I’d like to see this improving not only in the fashion sector, but also agriculture, technology, finance and transport. All of these other sectors feed into the fashion industry, and we need to see change across the board.

Which initiatives / organisations / individuals in the fashion industry do you feel are making significant waves, and why?

I came across a number of impressive initiatives and organisations in Europe and South Asia doing some great work around ethical fashion. However, Ethical Clothing Australia is the only voluntary certification body I have come across that can essentially guarantee ethical processes are being followed. The combination of strong labour laws, independent trade unions, and third-party oversight make this one multi-stakeholder approach to be emulated in other garment-producing countries. I must also commend the Bangladesh Accord for doing incredible work towards improving the garment industry in Bangladesh, in an oft-times hostile and resistant environment.

Increasingly, fast fashion companies are engaging with the term ‘sustainable fashion’ and launching ‘ethical’ capsule collections without necessarily considering the overall environmental and social impact of their business model and production methods. What are your thoughts on this, do you see scope for fast fashion businesses to drive positive change in the garment industry?

Many of these businesses are the ones investing the most resources and driving positive change in the garment industry, and I must commend them on that. That said, I personally find it difficult to reconcile this with the notion of overconsumption which fast fashion promotes. Not only is their business model contributing to waste streams in a huge way, but their inherently fast nature puts enormous pressure on garment factories and their workers, and inevitably corners get cut.

“It’s not fair or effective if only a handful of companies are taking steps to do the right thing and the others get a free pass.”

Most fashion companies have a code of conduct outlining what they will or will not tolerate throughout their supply chain. How can consumers trust these documents when subcontracting is so common in the fashion industry? Do you believe governments need to play a more significant role in both international regulation and consumer awareness?

Yes. As I mentioned earlier, I believe one of the key requirements of supply chain accountability is a level-playing field. We now have a number of international guidances around supply chain due diligence, which can serve as a basis for better regulation. This would also help companies to enforce the terms of their codes of conduct. It’s not fair or effective if only a handful of companies are taking steps to do the right thing and the others get a free pass.

Sewing clothes is not inherently dangerous yet many garment workers risk their lives while at work. What are your thoughts on the importance of unions and workers’ voice when it comes to improving labour conditions?

It is essential. However, there is also work to be done here in terms of education, freedom of association, and freedom from fear of retaliation for speaking out. The ILO Better Work program is doing some great work in this respect, through training workers and management in labour rights and practices.

The business model is such an important key to driving long term change in companies and the way that they operate. Are there any particular business models or ways of approaching sustainability that impress you?

I’m particularly encouraged by developments taking place in the circular economy space. It’s good to see a number of companies acknowledging that we live in a world of finite resources, and that there is a need to close the loop. I’m especially impressed with some ideas coming out of fashion design schools which are taking into consideration the lifecycle of an item at the very initial stages of production.

Has there been any progress over the past few years (throughout the fashion industry or society as a whole) that has been heartening to you on both a business and personal level?

Definitely. I remember when working in Brussels and about a year after Rana Plaza happened, there was concern that this might turn into another ‘forgotten tragedy’. The past few years however, have been filled with initiatives and global movements aimed at cleaning up this industry, with no indication of slowing down. Personally, getting involved in ethical fashion has taught me to be more conscious of all my actions, and that there is a like-minded community out there full of ideas and support.